End of the Season

It’s end of the year.  It’s the end of another anime season.  We completed another series with a decent success.  But that’s not difficult to do.  The note-worthy event of the day is my translation #783.  I just finished translation of Black Jack episode 61.  What’s more, I only translated episode 58 only two days ago – well after the release of 57.  And 58 is progressing so well that it’ll probably be released by Christmas.  The whole team is pumped right now to finish the series this year.  We have nine days left.  Isn’t that exciting?

Actually, the timing really doesn’t matter to me.  It just feels so good to have it done.  It took us 3 and a half years to release 63 episodes.  That’s less than 20 episodes per year.  It was a slow going project.  Sure, we took some detours – 17 episodes of Black Jack 21, a movie, and 13 episodes of RAY (just because BJ made cameo appearances in 2 episodes)… And this project always got put in the back burner of the whole team.  There were painful moments.

I’m ready for a vacation.

…only after I see those episodes released!

It wasn’t too long ago that I wrote about my translation #750.  Then I meant to make a post the day I did my 777th.  I missed that mark a while ago…  I just realized I finished my 782nd today.  Anyway.

What I just found is this – the blog entry from the day I completed my 300th translation way back in March of 2005.  I sure have been at this for a long time.  And it sure takes long time to translate 500 episodes of stuff.

I just ran into another instance of an atonal music. It is amazingly common throughout the world. And surprisingly pleasing to both the performers and audience. Actually, the performers far outnumber the audience. It’s not 12 tone or microtonal or any specific type. Perhaps it can be considered a parallelophonic. (Yeah, I just made that up.)

“Happy Birthday” – everyone knows that song. And everyone sings in different keys when they sing. It’s pretty amazing.

This is such a kick-ass stamp.  Why didn’t anyone else think of it before now? 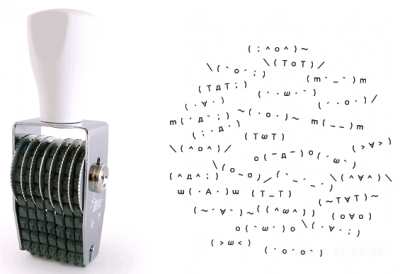 What the hell does that mean?

When we computer users need to use language that has more glyphs than what’s available on the keyboard (Chinese, Japanese and Korean are very notorious about that), we rely on a software called Input Method Editor – IME.  Google just released the Japanese version of their IME today.  I always love to try out these new products that I might use.  So like hundreds of people out there, I jumped on this case as well.

My first trouble was it defaults to Qwerty layout.  The fix was somewhat easy, since I had to make the same fix for MS-IME.  On Windows XP, find the location HKEY_LOCAL_MACHINE\SYSTEM\CurrentControlSet\Control\Keyboard Layouts\E0200411, and change the value for Layout File from Kbdjpn.dll to Kbddv.dll, then reboot.  Exact same thing as the fix for MS-IME except for the lowest part of the location difference of E0010411 and E0200411.

Apparently it doesn’t work on 64-bit version of Windows yet.  They’re already working on it – I sure hope it’ll come out soon, since I just recently installed Windows7 64-bit on this PC.  (It’s currently set up to do dual-boot between XP 32-bit and Win7 64-bit.)

Otherwise, I don’t have much to talk about the actual product yet – I haven’t used it enough to do the full evaluation.  That will have to wait for later date.

update Jan 6: It took Google only couple of weeks before they released the 64-bit version.  Yes, it’s now working smoothly on my Windows 7 64-bit.