At work, I support several web sites, some intranet and extranet sites.  My employer officially supports IE6.  Yuck, I know.  But most of the employees still use this nine year old browser.  I’m on IE7 tester group, so that’s what’s on my company PC.  And this just bit me.  Hard.

On Monday, I received an email from the extranet user, reporting that they cannot print the web pages correctly.  Yes, in business, printing can be a critical part of business. (Bleh.)  I luckily isolated the problem to IE8.  And the problem goes away when I use compatibility mode.  And I can force this mode using a meta tag.  That’s all fine and dandy.  The problem is, I cannot do a proper testing of this, because we have no IE8 where I work at.  And without proper testing, nothing gets rolled out to the production site.  What am I to do?

Then today, I received an email from one of the intranet users, reporting a certain page is not working right since the latest update made to it.  This was weird.  We tested it before the update was rolled out…  But this time, I find out that all testers were using IE7.  The page breaks on IE6.  This is so wonderful.  What am I to do?

Luckily, IETester lets me tests the pages in IE5.5, 6, 7, and 8 mode.  I can fix the second problem using this.  Fixing first problem is also possible, but… bleh, I would be wasting so much paper for that.  I’d rather use print preview to test it…

So… two things.  Damn Microsoft for producing this bastard child, then marketing it so well.  And damn the corporations for using these bastard technologies.

Translation – it’s all in the context

First, some off-topic stuff:  I was just updating this page today – Frostii’s project list.  It’s quickly getting big and out of hand.  I knew it was going to be like this eventually.  But it happened sooner than I expected.  It’s about time that I write another WordPress plug-in to make this easier.  Also, something struck me – we have almost as many current projects (12) as completed projects (13).  No wonder it feels like I’m working on releases all the time.  It’s not a bad feeling.

Back to the real topic:

The answer is in Nodame Cantabile Paris Chapter, episode 5 @ 4:33.  There may be other reference like this too.  The point is, Nodame runs on Chiaki energy, just like computer runs on electric energy.  So, in that old episode, Nodame was recharging on Chiaki power before he left for a concert tour.  This time, she’s generating that Chiaki energy using his shirt as the fuel source.  It sure accentuates Nodame’s eccentricity.  And that’s what makes this show fun!

I’ve been trying to get this working on frostii’s site and this site for quite a while, on and off.  I finally found how to make it work.  At the same point, I’m very dissatisfied with the current state.  This is going to be 100% web programmer’s talk.

The fancy comment editor is enabled using the plugin called MCEComments.  It works beautifully on the plugin author’s page.  It worked on the sites that I manage, as long as I didn’t enable the threaded comments feature in the WordPress.  I like threaded comments.  As soon as I had both the threaded comments and this plugin, things weren’t working right.  When I click on “Reply” link, I see two rich text editor boxes.  Only one of them work right.  It’s confusing, and it’s just not right. 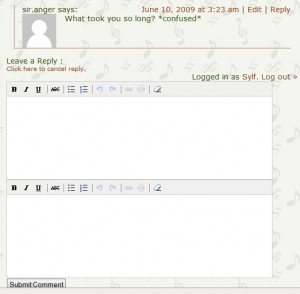 One of the rules in HTML, especially when working with DOM – never use same ID in multiple elements.  And this is what causes the problem.  In this particular case, the violating ID name is “comment_parent”.  And this is how the whole issue is created.

WordPress uses a hidden <input> tag, with ID “comment_parent” to keep track of the comment’s parent, so it can display the threaded comment.  Also, it uses a <textarea> tad, with ID “comment” to let the visitor type comments for the blog post.

TinyMCE, the WYSIWYG editor that can be embedded in HTML, does some magical stuff to enable its WYSIWYG system.  It creates this rich text editor environment in place of any <textarea> that the site designer designates.  During its process, it creates a new <div> tag, with ID name with whatever the original <textarea>‘s ID, plus "_parent".  That’s how the second “comment_parent” HTML element is created. 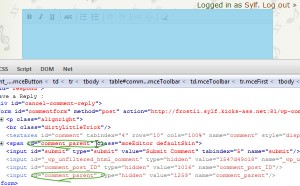 The problem is universal.  It actually is still present in the plugin author’s site too.  So, why does it break sometimes, and not break the other times?  It’s the placement of <input type="hidden" id="comment_parent"/> in relation to <textarea id="comment">.  More precisely, the WordPress function, <?php comment_id_fields(); ?>, needs to be placed after the said <textarea>.  And voila, the plug-in works as intended.

The real solution that doesn’t exit yet

The issue still doesn’t solve the issue entirely.  On one hand, WordPress depends on the two tags, <input id="comment_parent"> and <textarea id="commetn"> to make itself work.  On the other hand, TinyMCE does its job by creating a wrapper <div> tag with ID name with whatever <textarea>‘s ID plus “_parent”.  Both are happening mostly behind the scenes.  Trying to fix either component will be a daunting task.  In object oriented terminology, this is called the violation of the name spaces.  Two distinct components of a program is trying to use a resource that shares a common name, and stepping on each others’ toes.  It’s ugly.

It’s so ugly, that the PHP language developers thought it’s a good idea to add the namespace feature to their latest version of their product.  Perl, Java, Python… they’ve all supported it for a long time.  But HTML and javascript?  I doubt it’ll ever happen.  Name spaces in HTML?  That sounds so wrong.  But if it ever happens somehow, that’s one solution.  But that’s not for us common folks to fix.

So, the real solution #1 – let WordPress allow change the ID of either the hidden <input> tag or the <textarea> tag.  This will involve coding change in the core of WordPress.

Both solutions are easy by concept.  But both deals with the core of each components.  It won’t be easy to do.

Are ya kidding me?  There is no such thing!

Fire in the neighborhood

I came home tonight after a long day, and this is my apartment complex.

I counted at least 10 fire trucks on the site.  It wasn’t my apartment, or even the building I live in.  But it’s still in the same apartment comlex.  I can see that one unit is completely burned—it’s the conspicuously dark unit above the left most fire engine in the photo.

That’s kinda scary.  It was really scary driving into the parking lot, not knowing what was going on.

Holy cow, the font tag? Which half of it does not work anyway? (The font color gets overridden by the <a> tag’s default color.)  And what’s this line 24?  Using PHP’s print tag to print straight HTML code… that’s not so bad.  But using <strong> around the &nbsp;.  That’s absurd.  And too many <font> and <strong> tags and such – those should be handled with CSS, especially because this is a part of a tabular data.

Not to mention, the entire PHP code for the whole app was a huge mess.

Since I get at least some positive responses on recipe posts, here is another one.  I made this tonight, and it’s delicious.  I just bought 4 burdock roots just the other day, so this is a perfect dish for me.  And it’s a perfect side dish I can put in my packed lunch.  It’s good warm or cold. 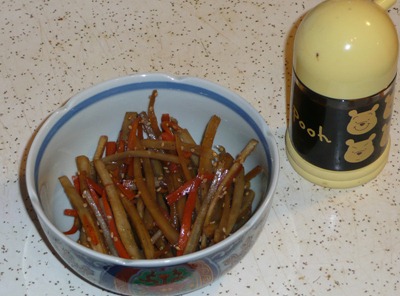 Getting ready for the new year (my ozoni recipe)

Today, I went to the Asian food market I normally go to, hoping to get something appropriate for the new years. I was vaguely hoping for some red beans to make oshiruko – Japanese sweet red bean soup.  They had canned red beans, but not dried beans that I wanted.  Instead, I found burdock and mochi.  That made me want to make ozoni – vegetable and mochi soup, also often seen during the new years season.

Only now I’m realizing that using burdock in ozoni is very unique to my family recipe.  So anyway… this is what I made.

…but it was so good, I finished more than 1/3 of the pot on my first meal.  It is different from what I remember, but that didn’t bother me too much.

Normally, komatsuna is used instead of spinach, which really brings the real taste of ozoni.  It’s impossible to get that here in Kansas, so I made this substitute.  Also, remember, the use of burdock is NOT common at all.  And one more thing – this is one of those dish that varies greatly from family to family, or from region to region.  There is no single definite recipe for ozoni.  If you feel brave, you can make your own variation.  I think my family also used satoimo (Japanese taro).

Happy new years to everyone!